“Die before you die,” most famously a statement of the Prophet Mohammad, is a message familiar to contemplatives from around the world and throughout time. And at this time in human history, when all of the world’s wisdom traditions are finally present to one another, it is no coincidence that humanity faces the greatest threats of annihilation it has ever seen. In the light of such unprecedented access to wisdom, it is all the more ironic that this threat comes from humanity itself.

In this process of our species waking up to its collective sense of mortality, not to mention the accelerating potential to give birth to new forms of sentience, it is all the more imperative that we explore the shadow side of materialist and neoliberal life-worlds: the denied and repressed realms of death and dissolution. This exploration must be both personal and collective, and it must include tangible practices and innovative rituals for dying before we die.

When we die as individuals, we have nothing left to lose. And whether it is from the many accounts of contemporary near-death experiences, or from thousands of years of recorded narratives of contemplatives and mystics, the experience of dying before we die is reported to be profoundly liberating. Suddenly the tremendous vitality that is normally diverted into maintaining fear-based paranoias and habits of separation are made available to imbue life with fearlessness, compassion, and celebration.

Similarly, if we were to learn to die and properly mourn as a global society, the endless variety of apocalypses we all fear will have already passed. Just as was the case with our individual fears and bad habits, the various collective ideologies of materialism also feed off the fear of death, and use it to produce more distractions and substitute gratifications, further consolidating their power over those that buy into it. But when the world wakes up to the post-apocalypse that is always and already present, the tremendous natural resources and vitality of the planet that are invested into and wasted by materialist systems of power and control can be reclaimed and celebrated for the common good.

Clear Light Mindfulness takes its name from the Tibetan yoga of death, the meditation on the clear light emptiness nature of mind. It is an exploration of how we can bring the esoteric yogic and contemplative practices of death and dying into a secular framework, and to make them accessible and beneficial to anyone from any tradition or anti-tradition.

Clear Light Mindfulness is also an inquiry into the mindfulness movement itself, into how mindfulness has unreflectively become subsumed into the totalizing agenda of materialist world views and neoliberal systems of power.

Moving from critique to positive social applications, Clear Light Mindfulness also explores how we can fully mourn as a society, so that the unsustainable life-worlds we inhabit can be liberated through practices of relational mindfulness, modern forms of creative ritual, and the uncontrived sacredness of the natural world. 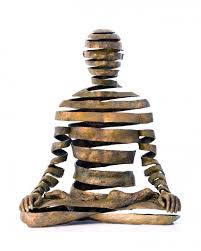 The course is divided into two sections:

Section one explores how we as individuals are conditioned by a fear of death, and how we might become free of this fear through practices the familiarize us with groundlessness, relativity, and the unborn nature of our awareness.

Section two turns a critical lens on the social dimensions of the mindfulness movement, and explores how a post-apocalyptic (or sacred) view of nature and society has the power to affect social transformation. Relational mindfulness practices and group practices inspired by Johanna Macy’s Work That Reconnects are coupled with practices to develop compassion and a sense of humor about “Living in the End Times.”

The fundamental question we must ask as practitioners of mindfulness is: How is this way of life transformative?

In other words, How am I growing in my capacity to benefit myself and others?” “How am I unmasking self-deception—personally, interpersonally, and socially?”

Mindfulness must not stop at stress-reduction.

Clear Light Mindfulness is about challenging our practice to approach the deeper questions of life, and to prepare for a death of full presence.

How can we cut through our physical, emotional, and existential baggage to the person we truly are?

How do we live freely and die wakefully?

How can we bring deep self-compassion and compassionate care into our relationships and society?

Is Mindfulness part of the problem?

Bringing a self-critical lens to the mindfulness movement is essential for ensuring the authenticity of the practice. It is essential to ask the difficult questions about how we use our practice to avoid relating with painful aspects of ourselves and the world.

Is mindfulness a distortion or evolution of traditional contemplative techniques?

Has mindfulness been coopted by neoliberal agendas and materialist world-views?

What does the science really say?

Scholarship and dialogue is an essential part of the approach of Clear Light Mindfulness.